This is the code for composing.studio, a web
application that aims to make music composition collaborative and accessible to
everyone. 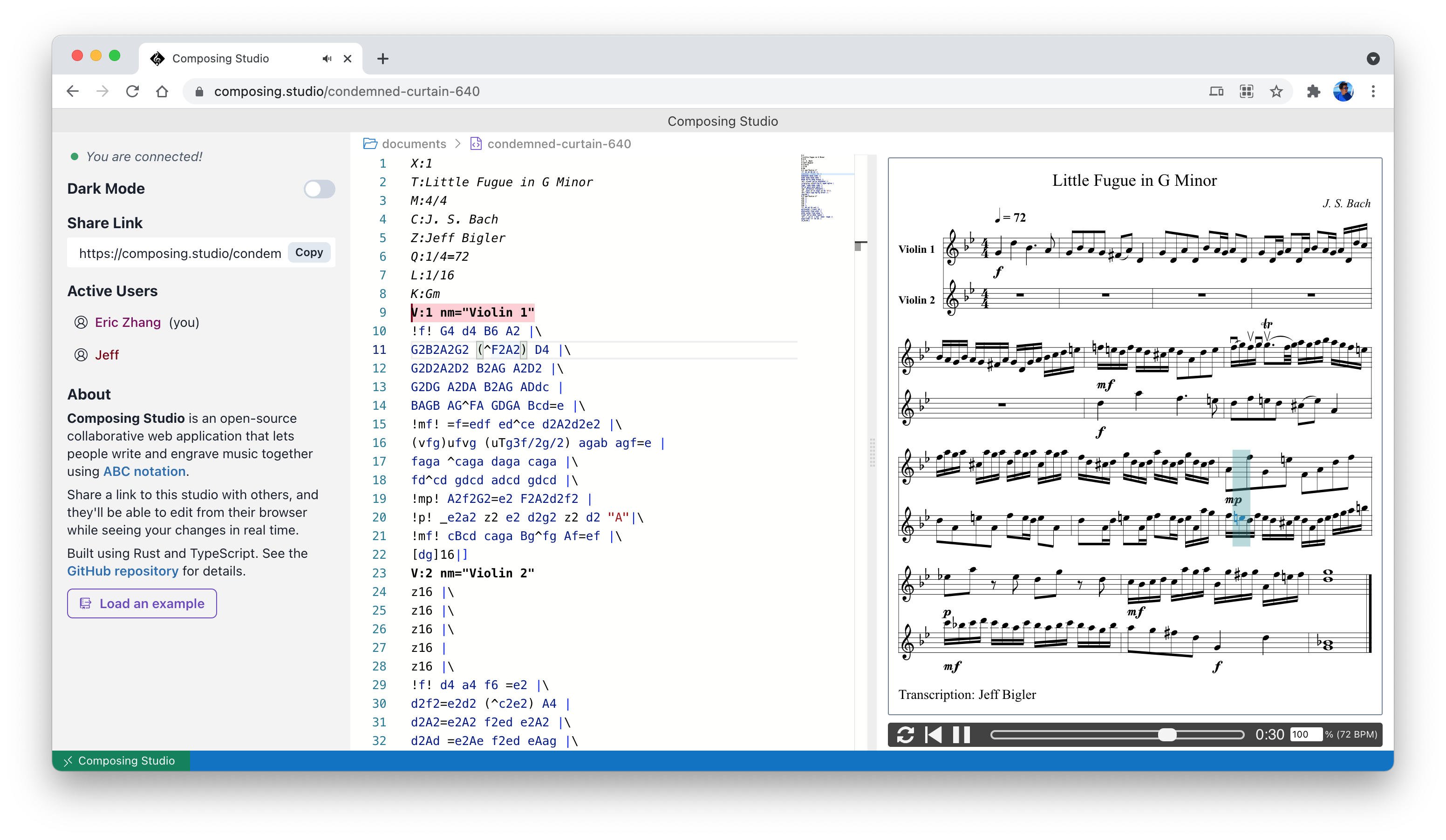 Right now it’s possible to write music in a textual format called ABC, which
works for transcribing simple songs + guitar chords, as well as some other
pieces like chorales and folk music. It has some limitations, but not too many
(someone has encoded a Beethoven symphony in ABC before!).

Here’s an example of an interactive editor built with ABC:
https://editor.drawthedots.com/. The editor is not super user-friendly, but it
showcases the utility and interest in this space.

We provide a friendly and intuitive web-based interface for editing ABC music
notation, with syntax highlighting, live preview, audio playback, and real-time
collaboration. Anyone can create a new collaborative session by entering our
website, and they can share the link with fellow composers to work together and
come up with new ideas.

This application is built using a backend operational transformation control
server written in Rust, based on Rustpad,
as well as a frontend written in TypeScript using React.

The backend server has support for transient collaborative editing sessions, and
the frontend offers a collaborative text editor with custom Monarch ABC syntax
highlighting, cursors, and live presence tracking. These parts of the
application are connected by WebSocket communication.

On the frontend, we use the abcjs library to
dynamically render sheet music from ABC notation and generate interactive
playback controls through web audio synthesis.

To run this application, you need to install Rust, wasm-pack, and Node.js.
Then, build the WebAssembly portion of the app:

When that is complete, you can install dependencies for the frontend React
application:

Next, compile and run the backend web server:

While the backend is running, open another shell and run the following command
to start the frontend portion.

This command will open a browser window to http://localhost:3000, with hot
reloading on changes.

This project is still in a very experimental phase. We’re exploring
different ways of allowing musicians to collaborate with each other in a global
community. If you’re interested in adding features or helping fix bugs, please
reach out to us first by creating a GitHub issue!

We have continuous integration for this repository, which checks things like
code style (Prettier, Rustfmt) and successful build (Docker). The current state
of the main branch is continuously deployed to the production web server at
composing.studio.

Tip calculator app Using ReactJS, TypeScript, Tailwind CSS and Vite.js
23 May 2022
A monorepo for comma.ai web interfaces and packages
21 May 2022
Weather App is a simple weather app developed in typescript using React, HTML and SASS.
17 May 2022