Even with a fast and highly tuned site and/or app following all of the best practices, it's all too common for your performance wins to be erased the moment third-party scripts are added. By third-party scripts we mean code that is embedded within your site, but not directly under your control. A few examples include: analytics, metrics, ads, A/B testing, trackers, etc. Their inclusion are often a double-edged sword.

Below is a summary of potential issues, referenced from Loading Third-Party JavaScript:

We set out to solve this situation, so that apps of all sizes will be able to continue to use third-party scripts without the performance hit. Some of Partytown's goals include:

Partytown's philosophy is that the main thread should be dedicated to your code, and any scripts that are not required to be in the critical path should be moved to a web worker. Main thread performance is, without question, more important than web worker thread performance. See the example page and test pages for some live demos.

If you're looking to run your app within a web worker, we recommend the WorkerDom project.

Traditionally, communicating between the main thread and worker thread must be asynchronous. Meaning that for the two threads to communicate, they cannot use blocking calls.

Party town is different. It allows code executed from the web worker to access DOM synchronously. The benefit from this is that third-party scripts can continue to work exactly how they're coded.

For example, the code below works as expected within a web worker:

First thing you'll notice is that there's no async/await, promise or callback. Instead, the call to getBoundingClientRect() is blocking, and the returned rect value contains the expected x and y properties.

Partytown on the other hand, is able to isolate and sandbox third-party scripts within a web worker, and allow, or deny, access to main thread APIs. This includes cookies, localStorage, or the entire document. Because the code is executed within the worker, and their access to the main thread must go through the proxy, Partytown is able to give developers control over what the scripts that can execute.

With debug and logging enabled, below is an example of the Partytown logs showing all calls, getters and setters: 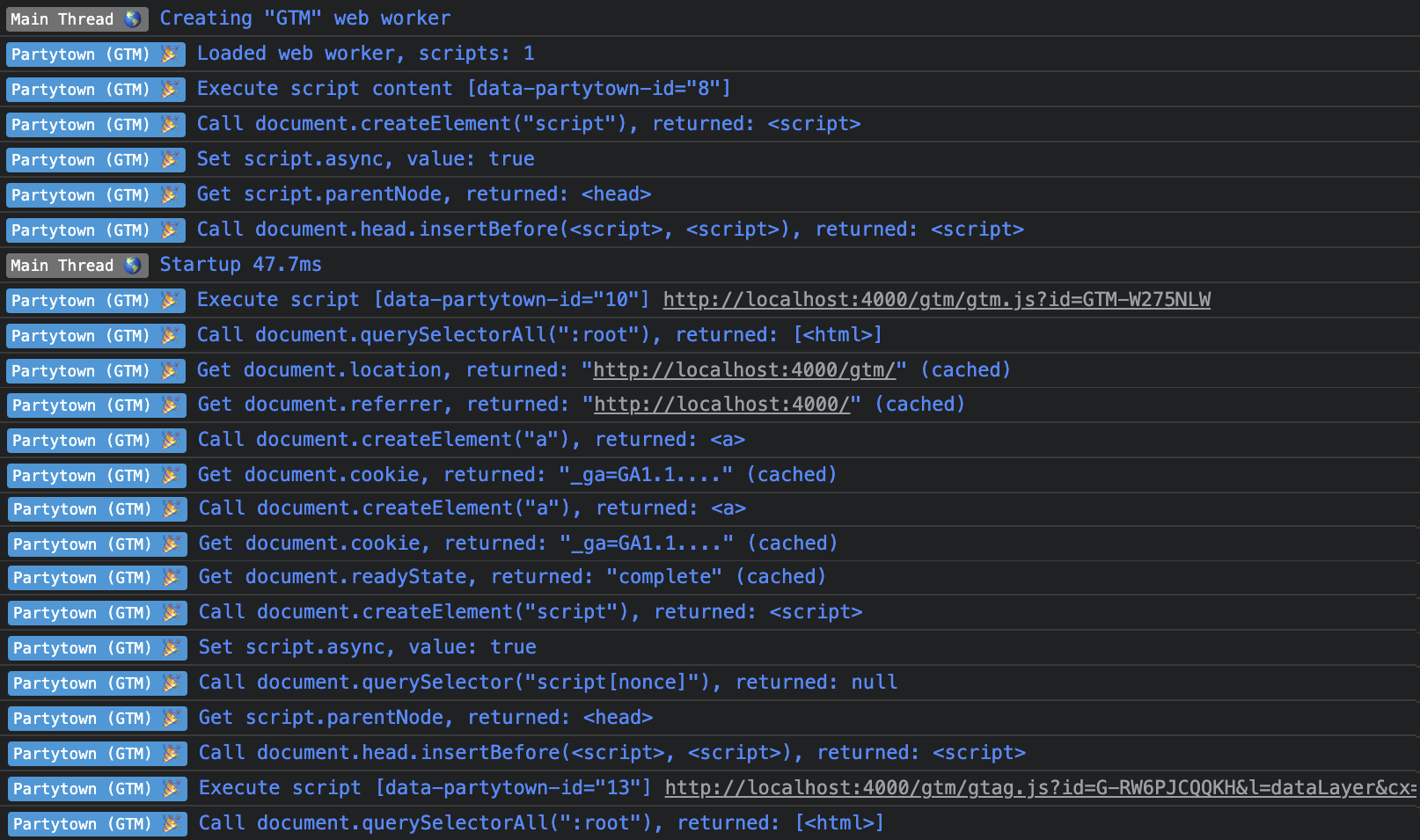 Nothing is without trade-offs. Using Partytown to orchestrate third-party scripts vs adding them to your pages has the following considerations to keep in mind:

Below are just a few examples of third-party scripts that might be a good candidate to run from within a web worker. The goal is to continue validating commonly used services to ensure Partytown has the correct API proxies, but Partytown itself should not hardcode to any specific services. Help us test!

How Does It Work?

Partytown relies on Web Workers, Service Workers, JavaScript Proxies, and a communication layer between them all.

Atomics are the latest and greatest way to accomplish the challenge of synchronously sending data between the main thread and the web worker. Honestly, it looks like Atomics may be the preferred and "correct" way to perform these tasks. However, as of right now, more research is needed into how Atomics could be used in production, while also using with the service worker fallback when Atomics are not supported.

If the browser does not support any of the features above, then it'll fallback to run third-party scripts the traditional way.

The <Partytown/> component also has all of the configuration properties, such as:

Partytown provides some of the most common analytics as React components, just for added simplicity and convenience.

Below is an example of adding Partytown's Google Tag Manager React component to a Next.js Document:

The React components are simply wrappers for convenience, but Partytown itself can be used from any framework, or no framework at all by just updating HTML.

Each third-party script that shouldn't run in the main thread, but instead party ? in a web worker, should set the type attribute of its opening script tag to text/partytown. This does two things:

To load Partytown with just HTML, the library script below should be added within the <head> of page. The snippet will patch any global variables needed so other library scripts, such as Google Tag Manager's Data Layer, continues to work. However, the actual Partytown library, and any of the third-party scripts, are not downloaded or executed until after the document has loaded.

With scripts disabled from executing, the Partytown library can lazily begin loading and executing the scripts from inside a worker.

To set the config, add a <script> with a partytown={}; global before the Partytown library script, such as:

An additional requirement is that the /~partytown/ directory should serve the static files found within @builder.io/partytown/lib. The quickest way is to copy the lib directory into a public /~partytown directory within your static server. Another option would be to set up a copy task within the project's bundler, or create a build step.

Below is an example of using Webpack's copy plugin to copy the source lib directory found in the @builder.io/partytown package, to the public/~partytown/ directory:

Additionally, the Partytown lib config can be used to change where the library files can be found on the server.

Many third-party scripts provide a global variable which user code calls in order to send data to the service. For example, Google Tag Manager uses a Data Layer array, and by pushing data to the array, the data is then sent on to GTM. Because we're moving third-party scripts to a web worker, the main thread needs to know which variables to patch first, and when Partytown loads, it can then forward the event data on to the service.

The forward property is an array of arrays, with each array representing a variable that should be patched on the global. Below is a vanilla example of setting up the forwarding for Google Tag Manager, Hubspot and Intercom. Notice dataLayer and _hsq arrays have a 1 at the end. This is used to signify that dataLayer is an array, where as Intercom should be set as a function.

Note that the React integration components will already add the forward configs to the Partytown library.

The distribution comes with multiple files: