Along with the browser extension, the measures can also be inspected in a console. See the usage section for more details.

This project started with a purpose of extending the work done by Will Chen on a proposal for React performance table. You can read more about it here.

A demo of the extension being used to examine the performance of React components on my website.

Performance measures can also be logged to a console. With every re-render, measures are updated and logged to the console.

To use this devtool, you'll need to install a npm module which will register a listener (read more about this in usage section) and the browser extension.

The below extensions represent the current stable release.

A umd build is also available via unpkg

This extension and package also depends on react. Please make sure you have those installed as well.

Note - The npm module is important and required to use the devtool. So make sure you've installed it before using the browser extension.

This section of the documentation explain the usage of devtool and the API for registering an observer in a React app.

To use this devtool extension, you'll need to register an observer in your app which will observe a collection of data (performance measures) over a time.

Registering an observer is very simple and is only one function call away. Let's see how!

You can place this code inside your index.js file (recommended) or any other file in your app.

Note - This should only be used in development mode when you need to inspect the performance of React components. Make sure to remove it when building for production.

Registering an observer hooks an object containing information about the events and performance measures of React components to the
window object, which can then be accessed inside the inspected window using eval().

With every re-render, this object is updated with new measures and events count.
The extension takes care of clearing up the memory and also the cache.

An optional callback can also be passed to registerObserver which receives parsed measures as its argument.

You can use this callback to inspect the parsed and aggregated measures, or you can integrate it with any other use case. You can also leverage these performance measures using Google Analytics by sending these measures to analytics dashboard . This process is documented here.

After you've registered the observer, start your local development server and go to http://localhost:3000/?react_perf.

The query parameter react_perf is required so that React can measure the performance timings.

Note - This extension works only for React 16 or above versions of it.

Printing the measures to the console

The performance measures can also be logged to the console. However, the process of printing the measures is not direct. You'll need to set up a server which will listen the measures. For this, you can use micro by Zeit which is a HTTP microservice.

You can pass an option object as an argument to registerObserver to enable logging and setting up a port number.

You can pass two properties to the option object, shouldLog and port.

Schema of the measures

Below is the schema of the performance measures that are logged to the console.

You can also inspect the performance of specific components using options through components property.

Overview section represents an overview of total time (%) taken by all the components in your application.

clear - The clear button clears the measures from the tables and also wipes the results. 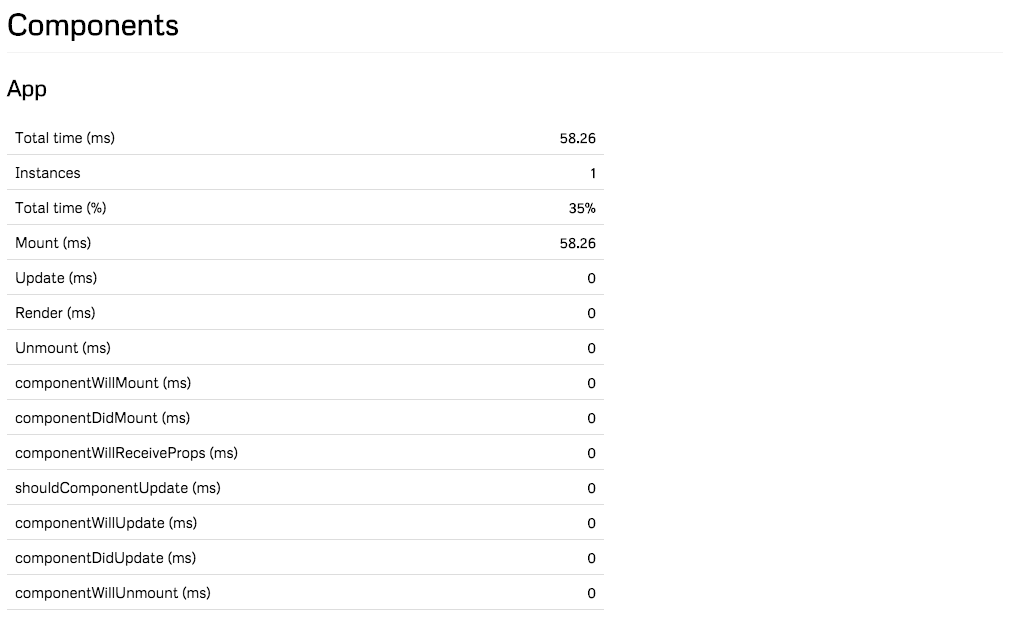 This section shows the time taken by a component in a phase, number of instances of a component and total time combining all the phases in ms and %

Given below are the different phases for which React measures the performance:

In previous version of this devtool, performance metrics were being queried instead of listening for an event type. This required to comment the line inside the react-dom package (react-dom.development.js) so that these metrics can be captured by this tool.

But now, with the help of Performance Observer API, an observer can be registered to listen to an event of a particular type and get the entries (performance measures). react-perf-devtool provides an API on top of the performance observer, a function that registers an observer.

This observer listens to the React performance measurement event.
It hooks an object containing information about the events and performance measures of React components to the window object which can then be accessed inside the inspected window using eval().

With every re-render, this object is updated with new measures and events count. The extension takes care of clearing up the memory and also the cache.

An option object and an optional callback can also be passed to registerObserver. The option object is useful when performance measures are to be logged to a console. The callback receives parsed and aggregated results (metrics) as its argument which can then be used for analyses.

Calculating and aggregating the results happens inside the app frame and not in the devtool. It has its own benefits.