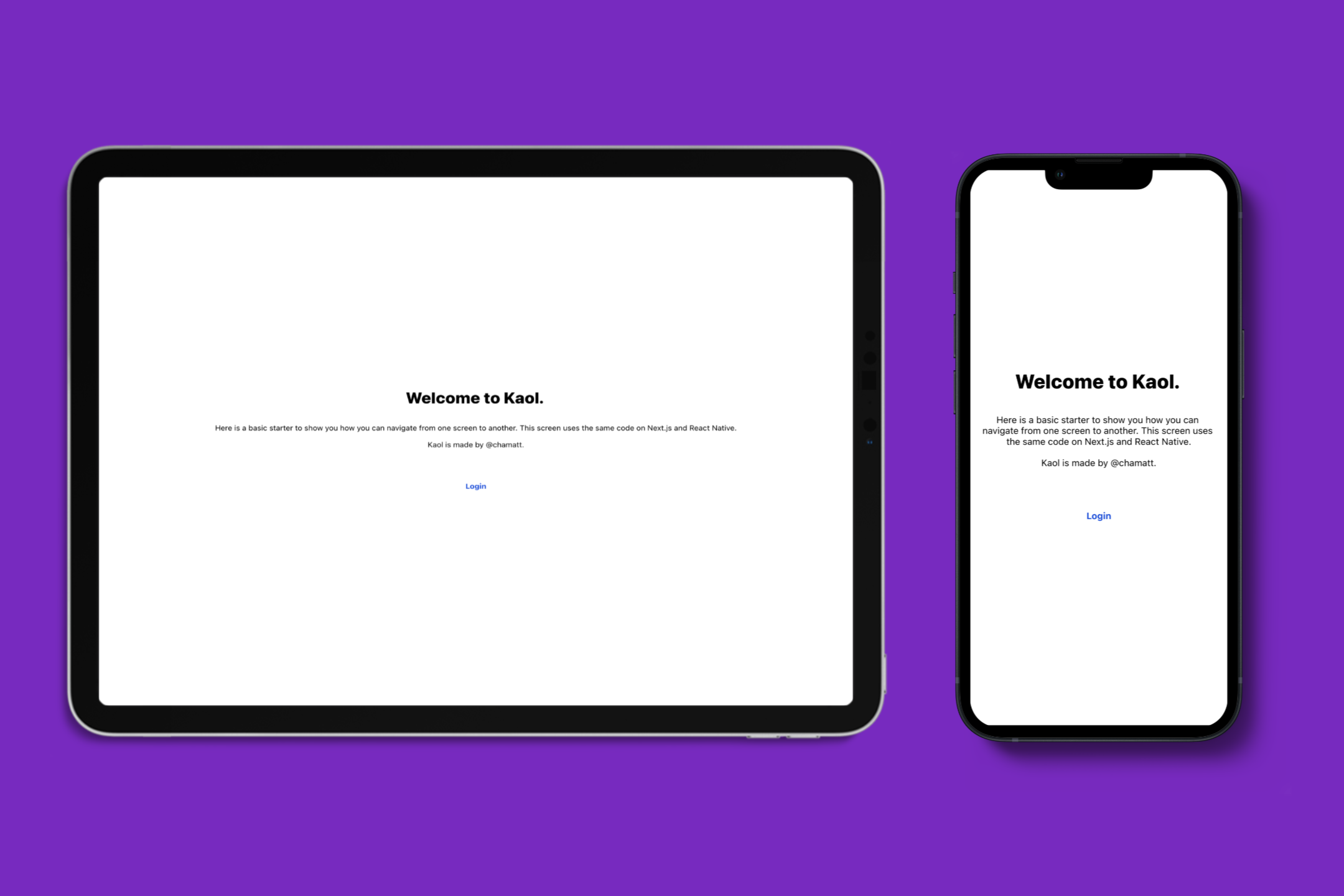 A monorepo with Prisma, Next.js, Expo, tRPC, Authentication and Solito setup and configured to work together. With this setup you can build a fullstack application with backend, frontend and mobile sharing 99% of the code, with full support for SSR and file structure navigation on nextjs, and full support for react native navigation on expo.

To create a repo based on this template:

I created this project for a personal need, I wanted something like the create-t3-app, but sharing code between the mobile app and the nextjs app. I could not get any of the available repos on github to work the way I wanted, so I decided to try and put a few of them together and after a few days of banging my head against the wall I finally managed to do it in a good way. There are still a few things I want to do, but it’s currently the best universal app monorepo template amongst what I could find.

You can add other folders inside of packages/ if you know what you’re doing and have a good reason to.

Dependencies: You need docker installed and running to be able to run this stack, as the postgres database is in a docker container. If you’re on mac or windows, just make sure docker desktop is opened.

If you’re installing a JavaScript-only dependency that will be used across platforms, install it in packages/app:

If you’re installing a library with any native code, you must install it in apps/expo:

You can also install the native library inside of packages/app if you want to get autoimport for that package inside of the app folder. However, you need to be careful and install the exact same version in both packages. If the versions mismatch at all, you’ll potentially get terrible bugs. This is a classic monorepo issue. I use lerna-update-wizard to help with this (you don’t need to use Lerna to use that lib).

A lot of libraries aren’t transpiled for next by default, so when you add a library make sure to add it to the transpile list in next.config.js, else they will problably not work.

Deploying to production (web and api)

This monorepo is pre-configured to work with vercel. You will need a postgres database, preferably with pgBounger enabled in session mode.

Start the project in vercel

Create a free database in supabase

With that connection string, you will have two environment variabled you need.

First one is the MIGRATION_DB_URL, this will be the connection string you copied above. This will be used during deployment to migrate the db to the latest migration.

Second one is the DATABASE_URL, it will be the same connection string you copied above, but with ?pgbouncer=true&schema=public&connection_limit=1 appended at the end. This is what the app will use, and it’s has connection pool enabled, which is a requirement for serverless environments

This will break preview apps because they won’t have any databases. If you want them to work you can repeat the same steps above to create a NEW database on supabase, and setup new environment variables only for the Preview environment.

After changing the environement variables, you will need to redeploy the app. To do that you need to push a new commit to the repository. You can have an empty commit like this:

When you’re ready for staging and production build, you’ll need to configure your environment variabled that your Expo app will use. To do that, you can head to packages/app/config.ts, and update the apiUrl for production (and staging, if applicable):

You should use EAS or Expo Build to build your app and deploy to the stores.

One thing to keep in mind when you are building is that you need to define the release channel as one of the ones defined above (development | preview | staging | production), or update the type definition for extra release channels you may want to use.

!! Attention: Run everything inside apps/expo

Publish the app to Expo Go

After this is done, you can preview the app in Expo Go via:

You can see all your release channels by simply opneing the Expo Go app, you don’t need to create the url above.

EAS CLI is the new default for expo builds. It has a severe disavantage in the fact that you can’t publish to expo go for free anymore, so I’d just use expo classic build while possible (but it will be discontinued in the next SDK)

You can build the app for each release channel by running:

To publish your production app to the store:

Your are now done, your app should be up and running with authentication working.

This setup is heavily inspired on a few projects: