Drag and drop your own code components. Let non-developers create stunning content, and free up developers from pixel-pushing.

Step 1. Install Plasmic into your codebase (exact package depends on your framework).

Step 2. Make components from your app or design system available for drag-and-drop in the visual editor:

Step 3. Add placeholders that render pages/components made in the visual editor anywhere in your app:

Plasmic is a visual builder for the web.
Developers integrate this into their codebase,
and anyone (including non-developers) can build pages or parts of pages.

The goal is to empower and unblock non-developers such as marketers and designers, while freeing up developers from pixel-pushing content, thus letting the whole team move faster.

Plasmic as a page builder and “visual CMS” is its simplest and most common use case. Editors can create and update content in Plasmic without code, and publish this into their production site without needing to block on developers.

Beyond website content, Plasmic can even be used to create frontends for complex web applications (such as Plasmic itself, which was built in Plasmic). This is possible because—despite being easy to start with—Plasmic gives you full visual control and works deeply with code.

Learn more on [our website][website] and our docs.

Or check out our Next.js-based talk and demo at Next.js Conf 2021: 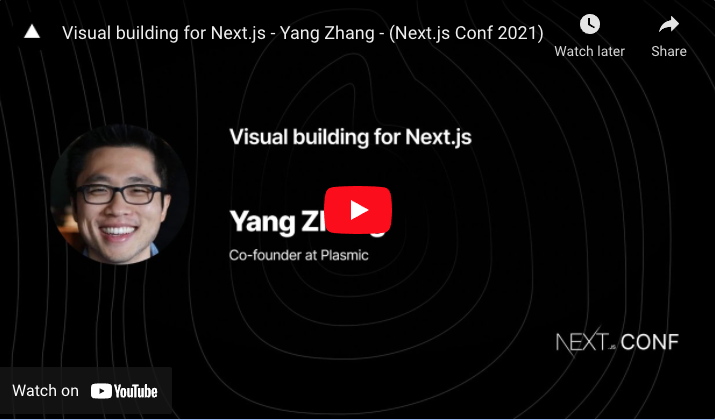 Get help and join our community

Connect with the Plasmic team and with other Plasmic users on the Plasmic Community Slack.

A smattering of interesting highlights about Plasmic:

Check out the [Case Studies and Community Showcase][customers].

The main way to integrate Plasmic into a codebase is via the Headless API.
The Headless API lets developers fetch and render into your existing codebase, without touching your code base besides the initial setup.
This allows your Plasmic users to build designs and pages, and publish directly to production, without involving the development team.

You can think of Plasmic as a CMS, but where editors get to edit HTML/CSS rather than JSON data.
Developers then just render the content as-is.

Plasmic does not host your site;
your site continues to run on your existing infrastructure and tech stack.

New pages can automatically just show up.
The codebase integration can be configured such that
as users create pages and routes in Plasmic Studio,
they will be auto-loaded into your app without developer involvement.

Bring your own React components

You can register your own arbitrary custom React components for use as building blocks within Plasmic Studio.
Learn more about code components.

Besides the Headless API, you can also generate React code into your codebase.
This is a powerful way to use Plasmic as a UI builder for creating rich interactive web applications—one example of this is Plasmic Studio itself.
See the application development tutorials to learn more.

We use lerna to help us manage dependencies between the @plasmicapp/loader-* packages, (though we may pull in more packages to be managed by lerna, right now those are the ones with tight dependencies on each other).

We also make use of Verdaccio to locally test packages. This just stands up an npm registry that you can publish your test packages to.

You’ll need to update the verdaccio config file, at ~/.config/verdaccio/config.yaml, to instruct verdaccio to not use npmjs for our test packages:

Run yarn bump to bump the versions of the changed packages. If you already have an existing git commit you want to use, do yarn bump --amend. Submit for code review.

Make user you are authenticating with npm as the plasmicapp user.

Ensure you have no outstanding unmerged commits or uncommitted changes.

Ensure you have pulled the latest changes from master.

Once your change has been approved and you’re ready to release to npm, run yarn release. This will individually publish each package to npm.